If you are still a big fan of the very first Window graphical version and want to run Win 95 on your existing, the most advanced, Windows 10, MacOS and Linux operating systems, as an executable program, then the easiest solution is available now.

You may also like to read the following posts:

I know writing about a program which was released 23 years ago seems outdated but there are still many enthusiasts which still love the old tech-antiques.

Slack developer Felix Rieseberg has created a Windows 95 app that runs on macOS, Windows, and Linux. The program is based on an existing web project that supports Windows 95 and Windows 98, among. 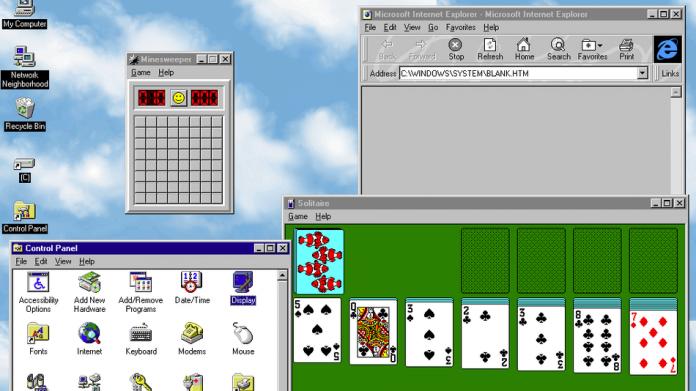 There are many reasons why I am writing about this topic today, like:

Nowadays we receive updates on our laptops every other day but we don’t know what we are getting. There is no really useful stuff in these updates. When you read the lengthy update documents, you’ll find only one thing – this is a security update.

I want you to go to the tech’s-chilehood-era and let you play with the basic version of paint, Minesweeper, Solitaire, and Hearts games.

I know we can’t nullify the importance of these modern operating systems, especially after the advent of this blazing fast internet, but at least we can show our children what we had been using in our childhood. In the future, we are going to have some form of Windows software in our household things like coffee mugs, teddy bears etc.

How to Install and Run Windows 95 on Win 10, MacOS and Linux

There are already many emulators available on the internet to have some fun while fiddling with the basic functions of Win 95, but a Slack developer Felix Rieseberg recently released a standalone app which can be downloaded directly on your existing major operating system.

The downloaded file size is not more than 150MB.

On Windows 10, simply run the downloaded executable file to install Win 95. Wait for 2-3 minutes until the installation completes. During this process, you may see some strange boxes but don’t worry. Everything will be fine in the end.

On MacOS, unzip the zipped file and then launch the resulting windows95.app file to start Windows 95 immediately.

Using Win95 on Win10 and MacOS

Handling of Windows 95 is very easy and simple.

When the app is installed, click on “Start Windows 95” button.

When the window of the app is in the active state, simply press the ESC key on your keyboard to engage and disengage your keyboard and mouse.

The pointer speed might be slow on some computer or on some Windows and MacOS version, but the keyword works flawlessly.

Just go to the Start button which is the unique selling point of Windows operating system, browse the already available stuff, run paint app, play the games and write some interesting stuff in the basic WordPad software.

If you want to run Windows XP apps on the latest versions, read our this post.

The Internet is not functional in this version, so don’t try to activate your AOL or AT&T internet. :)

Installing and using Win 95 app is really fun and I hope you all will give it a try and let your child play with the basics of technology.

You can also visit the GitHub page for the latest updates and releases.

PS: If you don’t want to download Windows 95 app on your hard disk, you can also run it in the browser.

Fancy running Windows 95 on your Ubuntu, macOS or Windows 10 desktop? Of course you don’t, but for some bizarre reason you now can.

A developer by the name of Felix Rieseberg has resurrected Microsoft’s ancient OS using the power of Electron, a cross-platform app development framework. 😱

“I put Windows 95 into an Electron app that now runs on macOS, Windows, and Linux. It’s a terrible idea that works shockingly well. I’m so sorry,” he writes on Twitter.

And we’re not talking a “fake” experience, or something just skinned to look like the real deal: this is a full-fat Windows 95 experience replete with all the apps, games and other cruft the OS is famous for.

Yes, that including Microsoft Paint, Notepad, and even a ridiculously early version of Internet Explorer.

Wondering how it’s possible to package and run an entire OS inside an Electron app? All props go to the v86 project, which promises “x86 virtualization in JavaScript, running in your browser and NodeJS”. Felix says 99.999% of his “joke” effort is down to their work.

Admittedly Felix’s Windows 95 electron app is more of a novelty showcase than a practical way to run the old school software. But I have to admit that it runs far better than it probably should!

Playing around with old versions of any operating system is always a hoot, even if you lack the “nostalgia” factor of having sampled it first time around.

For instance, I hadn’t ever used Windows 95 until I installed this app. What I found interesting (other than checking in on older versions of apps I haven’t used for the best part of a decade) is similar successive releases of Windows are to this formative version.

JavaScript, man: is there anything it can’t do (other than run efficiently)?

How well does it work?

First thing first: booting is instant: you launch the app, tap esc, and the whole desktop is there, right in front of you, ready to go.

I found the mouse sensitivity inside the virtualised window to be a little off. This made it difficult to accurately navigate my way around, move app windows, and access buttons. Once I got my bearings I did manage to get some some apps open, twiddle a few settings, and play around in minesweeper. 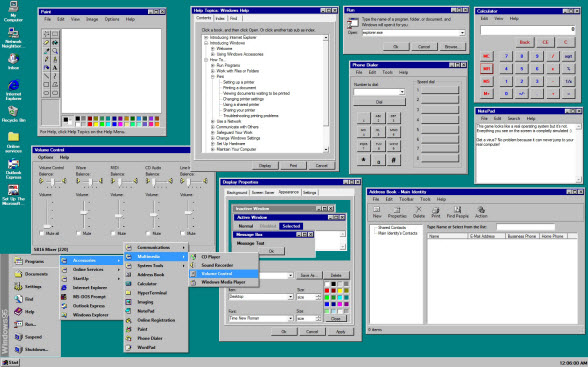 A couple features didn’t work (at least, not on my system) including network connections, display resizing, and pointer speed control. Oh, and launching the MS-DOS prompt did nothing other than freeze my session (blub).

You also can’t “reboot” the system, add new users, copy/paste between app and host OS, or make any major configuration changes without seriously stressing the poor thing out.

But Felix says, as this is all open source, he’s open to pull requests.

For me, I can’t complain; this is 22 year old legacy OS running through javascript virtualisation on a modern system. I’m amazed it functions at all.

Want to try it yourself? I know you do.

You can download Felix’s Windows 95 Electron app and run it on Windows, macOS or major Linux distributions like Ubuntu and Fedora.

This project might not stick around for too long (Windows 95 isn’t open source) so if you fancy checking this effort out in all its weird glory, do it sooner rather than later!

Once you have Windows 95 installed/unpacked go head and launch it. You’ll see a boot screen with two options. Just click inside the windowed area and select your choice, and, well, away you go!

You can “release” your mouse with a tap of the Esc key.